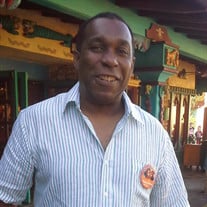 Donny Tyrone Davenport (Tyrone), loving son, husband and father entered this life August 17, 1954 in Columbia, South Carolina. His heavenly home called him on March 15, 2019. Tyrone was born the 2nd of six children to Mr. and Mrs. Clarence Davenport. He attended and graduated from Clinton High School in Clinton, S.C. and received a full academic scholarship to North Carolina Central University (NCCU) in Durham, N. C., where he received a Bachelor Degree in English in 1976. While a student at NCCU, Tyrone pledged with the Omega Psi Phi Fraternity, Inc., an organization that he loved and cherished. In May 1976 Tyrone embarked on his military career in the United States Navy where he moved up the ranks to become Lieutenant Davenport, and he served until July 1986._ Tyrone met Ms. Linda Thurmond in April 1985, and after a whirlwind romance, they united in marriage in July 1985 and have been married for over 33 years. Three beautiful daughters who could not have asked for a better or a more loving father were born from this union. In addition to being a dedicated husband and father, Tyrone was an entrepreneur who owned and operated Davenport Vending Enterprises. He was also a dedicated member of Fairfield Missionary Baptist Church, Statham, Ga., where he was Chairman of the Trustee Board and the Deacon Board. Additionally, Tyrone was a member of the Brotherhood Club, Statham, Ga. Tyrone’s father, Clarence and sister, Sharon preceded him in death. He leaves to cherish the memories of his blessed life to his wife, Linda Davenport; his daughters Brea T. Davenport of Atlanta, Ga, Tyra P. Davenport and Kaytiea (Katie) G. Davenport of Statham, Ga; his mother Gladys W. Davenport of South Carolina; his brothers Michael Davenport of South Carolina, Clarence (Doris) Davenport of Greenville, S. C., Jody (Donna) Davenport of Upper Marlboro, Maryland, Derwin (Sabrina) Davenport of Kernersville, North Carolina; his father-in-law Willie Thurmond, sister-in-law Brenda Thurmond, brothers-in-law Anthony (Ramona) Thurmond and Randy Thurmond, all of Statham, Ga, and a host of nieces, nephews, in-laws, fraternity brothers, and friends who love him dearly.

The family of Donny Tyrone Davenport created this Life Tributes page to make it easy to share your memories.

Send flowers to the Davenport family.