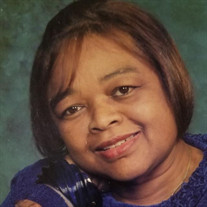 Mary Alice Sims Stevens, loving and devoted wife, daughter, sister and aunt, entered this life March 10, 1948 in Jackson County, Georgia. Her heavenly home called her on January 03, 2021. Mary was the 6th of nine children born to Katie Mae and Robert Sims. She attended and graduated from Glenwood High School, class of 1965. On December 23, 1973 she joined in holy matrimony with Mr. Captain (Calvin) Dozier Stevens and their marriage was blessed with a union for over 47 years. Mary had been employed by Westinghouse, Athens, Ga. where she was a faithful employee for over thirty years until her retirement. She joined Greater Barber Creek Missionary Baptist Church, Statham, Ga. at an early age and served tirelessly to spread the love of God throughout the church and various communities. During her membership at Greater Barber Creek, she served as church secretary, choir member, usher, missionary board member and youth leader. She was very active in both church and community activities that focused on the youth to give them guidance and support and also activities that provided services to the ederly and those who were less fortunate. Among the many organizations that she either joined or supported was nursing homes in the Commerce community where she volunteered regularly to sit with the ederly and provide them company, and CASA, where she was a Court Appointed Special Advocate. And although she never gave birth to any children, she was a loving and supportive surrogate mother and grandmother to many of her nieces, nephews and other children in the Commerce and Statham communities. Mary was preceded in death by her father, Robert Sims, her mother Katie Mae Kilgore Sims, her brothers, Curtis and Bobby Sims, her sister, Pearlie Thurmond and her step-son, Al Stevens. She leaves to cherish the memories of her blessed life to her husband Dozier Stevens; her brother Billy Sims (Karen), Statham; her sisters: Evelyn Harris and Marie Sims, Dayton, OH; and Grace McGuire and Levonia Brown, Statham; her step-son Ryan Stevens, Athens; her god-daughter Brea Davenport, Seattle, WA; her brother-in-law Willie Thurmond, Statham; sisters-in law: Patricia Williams (Johnny), Commerce; Connie Rivers (Tracy), Conyers; and Peggy Norman, Athens; nieces, nephews, step-grandchildren, cousins and friends who all adore and love her dearly.

The family of Mary Alice Sims-Stevens created this Life Tributes page to make it easy to share your memories.

Send flowers to the Sims-Stevens family.