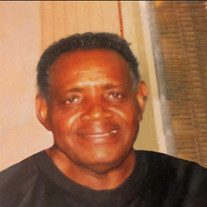 The Life of Rollie Claude Hanson Rollie Claude Hanson was born November 30, 1939 in Rayle, Georgia, Wilkes, County to the late Ulysses Hanson and Georgia (Evans) Hanson. There he joined Lyonsville Baptist Church at an early age. At the age of 10, the family moved to Athens, Georgia where he attended Judy Jackson Harris elementary, Burney Harris middle and graduated from Athens High and Industrial School in 1958. After high school, he enlisted in the United States Army where he was stationed in Fischbach, Germany. On home from leave, he asked Donnie Mae Scott for her hand in marriage and they were wed on December 31, 1963 and were united for 56 years. From this union, they would have one son, Michael. In 1965, Rollie, Donnie and Michael moved to Atlanta, Georgia where he was employed by Ford Motor Company for over 30 years. Rollie was well versed and very good with his hands. He enjoyed working on cars and general building activities as a carpenter. He would close in garages, add on rooms and perform general roofing for his family and friends. He also built his current home and assisted his son in building his home as well. Music and singing was his passion. In the early 70s, he wrote several songs for local Atlanta artists. One of his songs was recorded by William Bell, copyrighted and published by both ASCAP and BMI music publishing companies. The song received extensive radio play in Europe and overseas. He later joined Salem Baptist Church and was a faithful and dedicated member. His love for singing remained as he sang in both the Mass choir and Male chorus. He also toured for a number of years with Dottie Peoples & the People's Choice Chorale. Rollie was often referred to as the "Singing Man". He established many lasting memories and relationships while at Salem Bible Church where he was also a Deacon. Rollie was passionate about family and was a loving husband, father, father-in-law and grandfather. He truly valued spending time with family as he adored his daughter-in-law and treasured attending his grandsons’ school and sporting events. Even as his mobility began to decline, he was determined to show his support. The "grand boys" as he called them were the highlight of his life. Rollie entered into rest on August 5, 2020. The memories of his life will always be cherished by his wife Donnie. He also leaves to cherish his memories, his son: Michael (Lisa) of Atlanta, sister: Doris Payne of Atlanta, two sister-in-laws: Mae Frances Bush of Ila and Johnnie Scott of Ila, one brother-in-law: Charlie Scott (Linda) of Commerce, two grandchildren (Michael and Kyle) and a host of nieces, nephews, cousins, in-laws, church family and friends. He will truly be missed by all that loved him, knew him or came in contact with him.

The Life of Rollie Claude Hanson Rollie Claude Hanson was born November 30, 1939 in Rayle, Georgia, Wilkes, County to the late Ulysses Hanson and Georgia (Evans) Hanson. There he joined Lyonsville Baptist Church at an early age. At the age... View Obituary & Service Information

The family of Rollie Claude Hanson created this Life Tributes page to make it easy to share your memories.

The Life of Rollie Claude Hanson

Send flowers to the Hanson family.