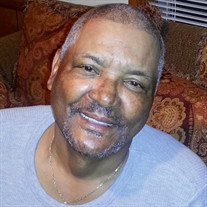 Willie Brown Rucker was born August 6, 1947 at home in Banks County, GA. Willie was the sixth of nine children born to the late Fate and Opal Rucker. Willie was preceded in death by both parents and five brothers; Theodore, Joe, Billy, Paul, and Phillip Rucker. He was a life long resident of Banks County, GA where he resided with his lovely wife, Edna Mae Tarpkins-Rucker. Willie was also a U.S. Veteran who served his country proudly during the Vietnam Conflict. He accepted Christ at an early age and remained committed to faith until he was called home to Glory on August 27, 2021. Willie was raised in Banks County, GA and attended and graduated high school at Cornelia Regional High School in Cornelia, GA. Shortly after high school he was drafted to serve in the U.S. Army from 1967 to late 1968. After his time in service he briefly attended barber school, and later received training and retired as a professional welder for ABB in Athens, GA. At the age of 52, he and his brothers started a successful poultry business; Rucker Brother's Farm that is still family owned and operated today. Willie leaves to cherish his memories a wife, Edna Tarpkins-Rucker; two children: Micheal Rucker (of Tucson, AZ) and Stephanie Rucker (of Grayson, GA); nine grandchildren: Shanice, Justin, Jerrod, Yasmine, and Miguel Rucker, Rayna Martin, and Jaylon and Jadyn Cantrell; one great-grandchild: Kameron Rucker; two brothers: Bobby Rucker, Mr. & Mrs. Vernon (Mary) Rucker; one sister: Mr. & Mrs. George (Rachel) Law; and a host of nieces, nephews, cousins, and close friends. "Words From The Heart of a Soldier" I have fought a good fight, I have finished the race, I have kept the faith. Finally, there is laid up for me a crown of righteousness, which the Lord, the righteous Judge, will give to me on that day, and not to me only, but also to all who have loved His appearing; do not weep for me, but weep for yourselves, and for your children. I'm in a better place now. Remember Jesus said: “Let not your heart be troubled; you believe in God, believe also in Me. In My Father’s house are many mansions; if it were not so, I would have told you. I go to prepare a place for you. And if I go and prepare a place for you, I will come again and receive you to Myself; that where I am, there you may be also. And where I go you know, and the way you know.”

Willie Brown Rucker was born August 6, 1947 at home in Banks County, GA. Willie was the sixth of nine children born to the late Fate and Opal Rucker. Willie was preceded in death by both parents and five brothers; Theodore, Joe, Billy, Paul,... View Obituary & Service Information

The family of Willie Brown Rucker created this Life Tributes page to make it easy to share your memories.

Send flowers to the Rucker family.